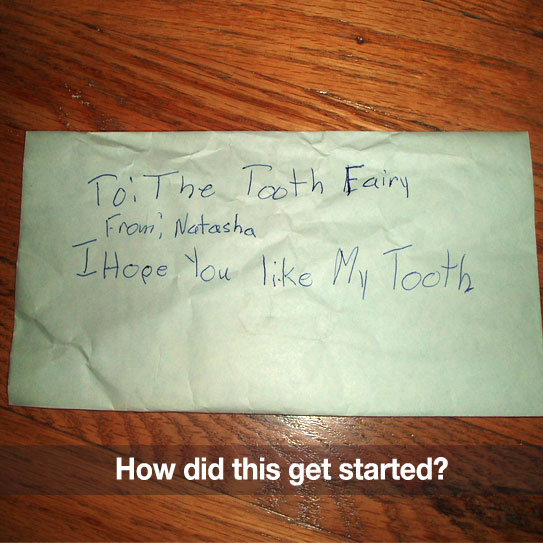 THE LEGEND OF THE TOOTH FAIRY has been around for ages. But you may not recognize the winged pixie you know and love from these old traditions…

Centuries ago in Europe, parents buried their child’s lost tooth in a “tooth garden”. This was believed to prevent an evil witch from stealing the tooth and casting a spell on the child! The same superstition spread around the world. Early American settlers placed children’s teeth in flowerpots. Some people even believed that swallowing the tooth was the best way to protect children from evil.

Another interesting idea was that if an animal swallowed the child’s tooth, that child’s new adult tooth would resemble the teeth of the animal that swallowed it! This superstition evolved into the story of the “tooth mouse”—a French story in which a fairy turns into a mouse and hides under an evil king’s pillow. To save the queen, the mouse proceeds to knock out all of the king’s teeth while he sleeps!

Eventually, Teeth Were Exchanged For Coins

The “Making” Of A Tooth Fairy?

Do You Have A Favorite Tooth Fairy Memory?

What was YOUR experience with the tooth fairy when YOU were young? What traditions have you held on to with your own family? We’d love to hear them. Please comment below, or on our Facebook page!